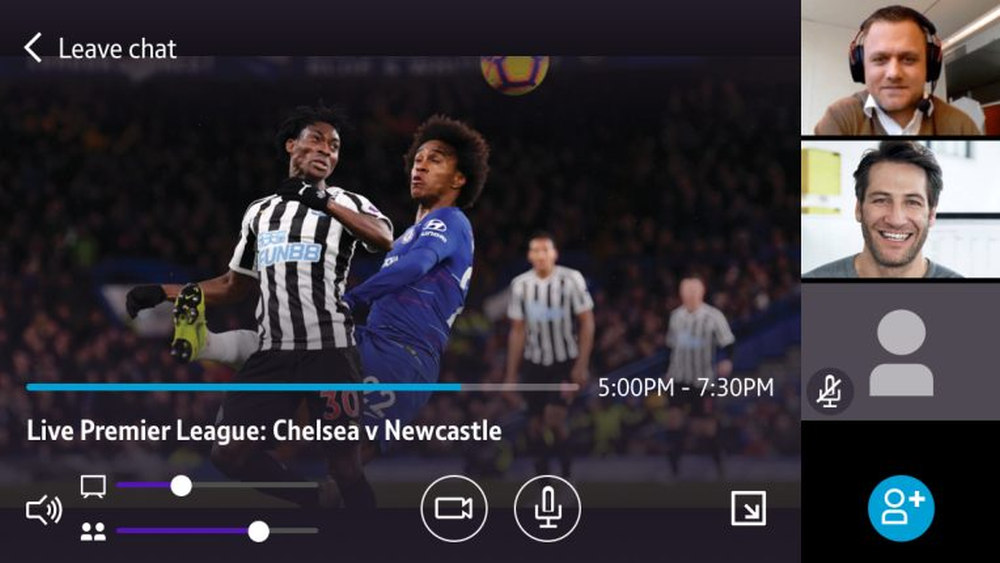 With Premier League matches happening behind closed doors, many of us miss the fun of watching football with our mates. To address that, BT Sport is now trialling a unique new “Watch Together” feature, that combines video chatting (think Zoom) with live streaming of the matches on your phone.

BT Sport normally broadcasts sporting events from around the world – from exclusive rights to live Premier League games, to UEFA Champions League, ESPN and others.

It’s available for BT Broadband customers or as an add-on for the “traditional” pay-TV subscriptions like Sky, but also as a standalone monthly pass, at £25/month (See our guide on how to watch BT sport for free).

The new “Watch Together” feature, which only works on the BT Sport smartphone apps (either iOS or Android), lets you see and chat with your friends, while the live game is being streamed on your phone’s screen.

The screen splits in two, with your friends (the ones you invited) appearing in one half, and the game streaming live on the other half of the screen. The app will even slow down – or speed up – the stream, in case you’re not in sync with your mates.

BT say they’ve been working on this feature for years, and it was originally planned for next season – but was brought forward in order to give people at home “the best matchday experience possible.”

How Do I Use The Watch Together Feature?

For now, the feature only works on smartphones, and not on big-screen TVs. So you can’t use it on Smart TVs, on Sky, the NOW TV app, or any other big-screen alternative.

To get the new feature, you’ll need the latest version of the BT Sport app. However, since the feature is still in beta testing, some users might not get it right away.

When you start playing a live stream of a match, you should see the “Watch Together” icon on the top right.

Once you tap it, you can then invite friends and family (who must be BT Sport subscribers as well), via e-mail, WhatsApp or an SMS.

In a fashion similar to Zoom, your friends will receive a link that will enable them to watch the same streaming “room” you’re in, and watch the game with you, while video-chatting. The app gives you two volume-control dials, so you can independently change the volume of the games and of the video chat.

For now, the Watch Together feature is still in beta – so you might encounter problems. Plus, BT say that at times of particularly heavy traffic, they might disable the feature or prevent more people from joining.

Jamie Hindhaugh, chief operating officer at BT Sport, told SVG Europe why the trial has been brought forward: “What we’re trying to do is reflect the situation we’re all in; you can’t go to a game, you can’t meet up with your friends.”

Watching Together Around The World

Virtual watch together “parties” have become more common during the last few months, for obvious reasons.

To that end, some of the big streaming platforms have been adding this feature to their core service.

US-only streaming service Hulu, for example, has been testing a “Watch Together” feature that syncs up the video for a group watching together, while letting them chat.

The popular media management platform Plex is also testing a “Watch Together” feature, but for now it only syncs up the video for a group of people – the chat needs to take place on a separate service.

Netflix, on the other hand, don’t have any official “watch together” platforms, though there are third-party plugins and services – like “Netflix Party” – that try to facilitate this.

BT Sport’s new Watch Together is unique in that it combines synching of the live video stream – along with video chatting that’s already built-into the app.

If it works well, it can be a real gamechanger for the current streaming video world.