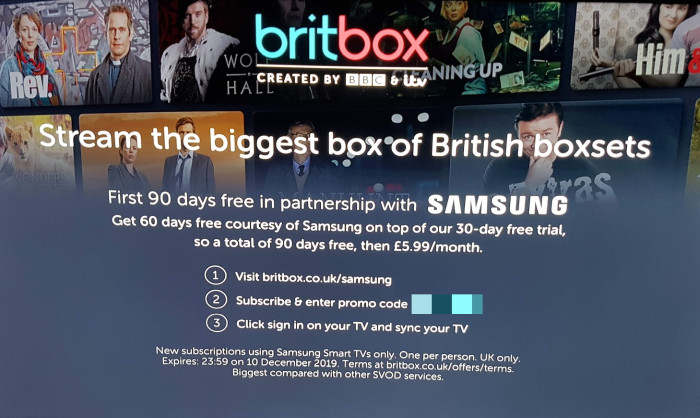 If you haven’t tried BritBox yet, the new streaming service from ITV and the BBC, you can now give it a go for 90 days, for free – but ONLY if you have a Samsung TV. And one that was made after 2016. Not one of the lucky ones? Then you can still get a free trial – but only for 30 days.

BritBox UK (not to be confused with its US counterpart, which has been around longer and isn’t available to viewers in the UK), is a subscription service that brings a variety of past and current British TV programmes, as well as classic British films. It normally costs £5.99/month.

At launch, BritBox includes content from ITV, the BBC and Channel 5, and will add content from Channel 4 in 2020.

On Boxing Day, Doctor Who fans are going to get a special treat, as more than 600 classic Doctor Who episodes will be added to the service (but without any of the 2005+ incarnations, at least for now).

As a Black Friday surprise, Samsung TV owners (with models from 2016 onwards) can now get a free BritBox trial for 90 days – instead of the usual 30 days.

Once the trial is up, though, you WILL get charged the regular £5.99/month, unless you cancel – here’s how to cancel BritBox.

Also note that this special offer is only for NEW BritBox subscribers – so if you’ve already taken the free trial (with or without a Samsung TV), you won’t be able to get the prolonged one. You have to redeem the offer here by 10 December 2019.

To get the free 90 days BritBox trial, you first need to find the BritBox app on your Samsung TV app store (if you have a new TV, it’s possible the app is already pre-installed).

Once you run it, you have to register with BritBox on your PC/smartphone, and enter the promo code seen on your TV.

At that point, you pair the TV and your BritBox account – and you’re good to go for 90 days.

If you don’t have a Samsung TV and are not eligible for the 90 days trial, don’t feel too bad – as you have almost no other way to watch BritBox on your TV, anyway.

For now, BritBox is only available on 2016+ Samsung TVs and Apple TV devices. Plus, on smartphones and desktop browsers.

In the near future, the BritBox app is supposed to be added to Amazon’s Fire TV as well as FreeviewPlay devices like that Manhattan T3-R – but there’s no set date yet. For now, there are also no known plans to add a BritBox app for Roku devices.