Episodes from a wide selection of premium TV programmes are now available to watch free of charge, thanks to a new ongoing promotion on Amazon’s Prime Video service.

Viewers don’t need an Amazon Prime membership to watch the free episodes (though a free Amazon account is required), but there’s one catch: you only get the first episode from each series for free. If you want to watch the rest – you’ll have to subscribe…

The free episodes all come from Amazon’s Prime Video Channels section, which holds premium 3rd party channels such as StarzPlay, MGM, hayu and others. 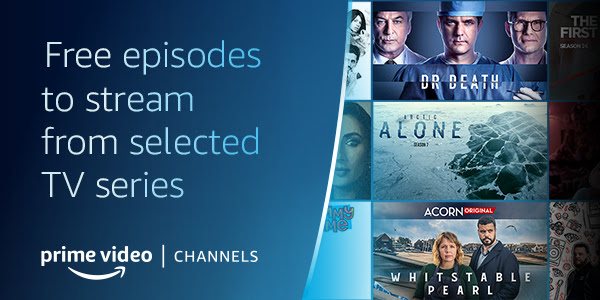 The episodes are from shows such as the new Dr Death, Stephen King’s The Stand, The Unexplained with William Shatner, and more.

What Is A Prime Video Channel?

Amazon’s Prime Video Channels are an add-on to your Amazon Prime Video subscription. They launched in the UK back in 2017, and the list of available channels has been growing since.

Since they’re an add-on, you normally must have an active Amazon Prime subscription first (or Prime Video), and then you can add the channels on top of that – which means these channels aren’t available to everyone (though as mentioned, you can get the free episodes without a Prime subscription – see below).

There’s a big range of channels – from the well known StarzPlay, BritBox, Discovery and Shudder, to some that are more obscure, but cater to a niche audience.

Most of the channels offer free trials (usually for a few days), after which you pay a monthly fee, usually ranging between £3.99/m to £6.99/m.

Before you can add a channel, you need a Prime Video subscription – but you can also get a free 30-days trial of Amazon Prime.

How Can I Watch Free First Episodes On Prime Channels?

Amazon’s new promotion will be ongoing – which means there will be new first episodes offered every month.

You can watch the free episodes on your computer’s browser, but also on any device that has the Prime Video apps – from phones and tablets to most streaming devices and Smart TVs.

Some of the highlights this month include:

It’s based on a hit podcast, Dr Death tells the shocking true story of Dr Christopher Duntsch, a seemingly bright young neurosurgeon with a thriving medical practice. But all is not as it seems….

A true-crime drama that follows Gypsy Blanchard (Joey King), a girl trying to escape the toxic relationship she has with her overprotective mother, Dee Dee (Patricia Arquette).

Her quest for independence opens a Pandora’s box of secrets, one that ultimately leads to murder.

William Shatner explores the facts behind the world’s most fascinating, strange and inexplicable mysteries.

Mike Brewer travels the world to indulge his passion for all things automotive.

From the lowriders of East LA to tiny shops in England’s Midlands, he finds people who share his love of finding, building and driving cars.

A new (2020) adaptation to Stephen King’s famous book, where the fate of mankind rests on the frail shoulders of the 108-year-old Mother Abagail and a handful of survivors.

You can see the full list of Prime Channels that are currently available for free, on this page.