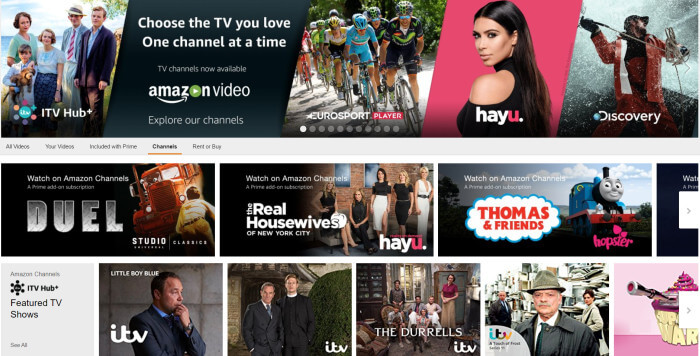 Many months after it’s debut in the United States, Amazon announced this week that it will be adding “Amazon Channels” to its Amazon Prime video streaming service in the UK (along with Germany and Austria).

The service, which is only available to existing (or new) Amazon Prime subscribers, will enable viewers in the United Kingdom (Cord Cutters in particular) to pick and choose different channels of content, from a variety of providers – for an additional monthly fee.

At the moment, there are over 40 channels to choose from, among them:

All of these channels offer a free trial, ranging from 7 days to a full month. Keep in mind that these prices are above what you’re already paying for an Amazon Prime subscription (£79 per year), so if you subscribe to several of these channels, the prices do add up.

Once you add any of these channels to your Amazon Prime subscription, you will be able to watch its shows via the regular Amazon Prime Instant Video apps, which are available on phones, tablets, PCs and TV streaming devices (or smart TVs).

Is Amazon Channels Worth It – My Take

In general, Amazon Channels is a blessing – any way to add to the content available for cord cutters is good.

The selection, however, leaves a lot to be desired – in the United States, Amazon’s channels include premium services such as HBO and Showtimes. In the United Kingdom, most of the offerings are very niche-oriented – reality TV, horror movies, etc’, with ITV+ being the most geared towards general audiences. Then again, the inclusion of the Eurosport channel is important, because UK cord cutters who love sports have very little options.

The ability to easily subscribe and unsubscribe every month is wonderful, and is exactly the point of being a cord cutter. In the mood for some Kardashians this month, and Discovery’s nature shows the next month? No problem, you can change your choices every month.

But the service won’t be a major offering until Amazon can add premium channels, as it does in the US. With Sky (and Now TV) holding the rights for most of HBO and Showtime’s shows, this doesn’t seem very likely at the moment.

Still, as an added, flexible option for existing Amazon Prime subscribers – this is definitely a step in the right direction.