How To Unblock 40+ Netflix Countries With Hola VPN

Netflix and the other big streaming services offer a lot of content these days – but we can always use MORE stuff to watch, right? The good news is that if you’re already subscribed to Netflix anyway – you can gain access to a long list of additional TV programmes and movies.

You will often see articles about the US version of Netflix, which has a bigger selection than the UK Netflix library. And while that is true – why settle for the US version, when you can open up the entire world (well, almost), and virtually jump from country to country – each with its own unique library of content?

And one of the best ways to do that, is with Hola VPN. As we’ll explain in a minute, Hola is not just a regular VPN (which there are countless of out there) – it’s a unique service, that combines peer-to-peer technology with fast, private servers. This has several advantages – one of which, is that they excel in bypassing geo-blocks on streaming services and other geo-blocked websites around the world. 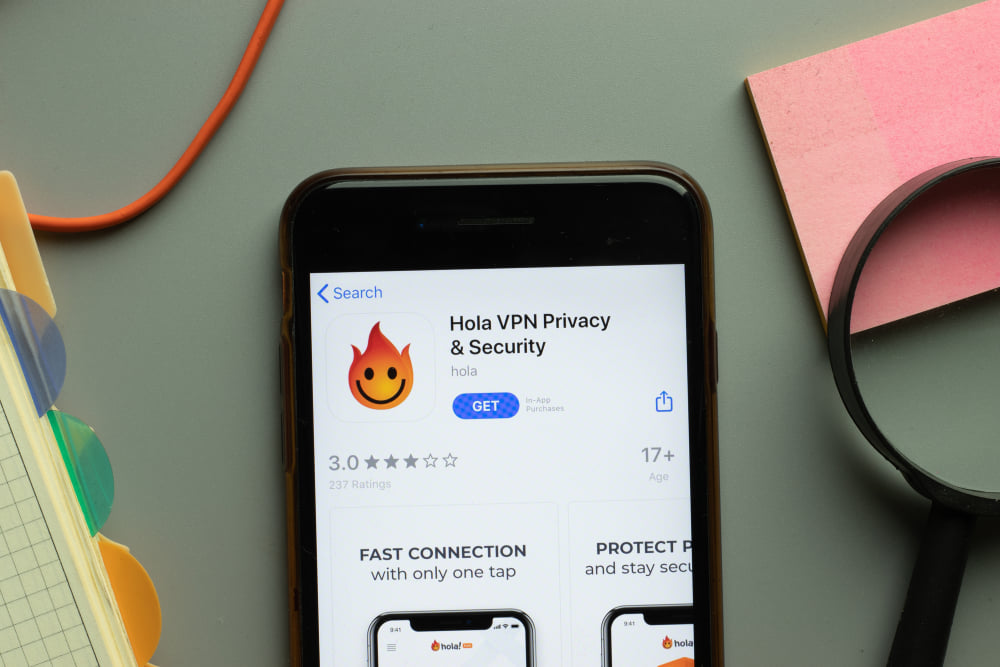 Why all over the world? Because while the American version of Netflix has a lot of programmes and movies that we don’t have in the UK, the Canadian version has shows you won’t find in the US or in the UK.

Then there’s Netflix Japan, with its own unique set of shows, including a lot of unique animated ones… and Germany… and Argentina… and the list goes on and on.

Want a few examples? As of this writing, Grey’s Anatomy is available in quite a few Netflix countries (the US, Canada, Argentina and others), but NOT in the UK. The popular TV show Billions is available on Netflix in Argentina, Japan and a few others.

The Blacklist is also available in several Netflix countries (Germany, Australia, US and others). Want to see the Canadian version of Dragon’s Den? It’s on Netflix Canada. And the list keeps expanding…

Also – when you go on holiday and travel the world, especially since Brexit, accessing content from your home country has become an issue. Hola solves that problem as well.

So how do you make this magic happen with Hola? Let’s review.

Using A VPN To Unblock Netflix And Other Streaming Services

Even though Hola is a special kind of VPN, let’s start with the basics first – what’s a VPN?

VPN stands for Virtual Private Network. In essence, a VPN creates a secure connection between your device (PC/phone/tablet/etc’) and another computer somewhere in the world.

Then, you use the OTHER computer/server you’re now connected to, to browse the internet – so for all intents and purposes, it’s as if you’re sitting next to that other computer – wherever in the world it may be – and using it for your internet browsing.

While it may sound complicated – don’t worry, when you use a good VPN, it all comes down to choosing a country from a menu – and everything else happens behind the scenes.

And this is where the streaming services come in – if you connect to a VPN server in Canada, it’s as if you’re actually in Canada – so you will get that streamer’s Canadian catalogue – and the same goes for every other supported country.

A VPN can also help safeguard your privacy – so websites can’t trace and track your browsing. When you’re browsing the internet without a VPN, websites can see and save your IP, which they can then use to get information about you – such as where you are in the world.

And, as long as your IP stays the same, those websites/companies can theoretically track you across the internet. Additionally, while an IP address is anonymous, your Internet Service Provider (Virgin Media/Sky/BT/etc’) can make the connection between your IP and you – and in essence, see ALL your browsing history (even if you use ‘Incognito’ mode).

So when you’re using a VPN – you’re not browsing with your “real” IP. Though it’s also important to make sure the VPN you’re using doesn’t keep logs of your internet activity – and Hola has a strict no-logging policy.

How Is Hola VPN Different?

Hola’s been doing this since 2007 – so they know their stuff. Unlike most other VPN companies, they also have a free tier, where you get a VPN service for free.

Surprisingly, even the free tier worked well in my testing for unblocking Netflix and other streaming services – but the speed won’t be as good, and you won’t be able to get 4K streaming – which is where the paid (Premium and Ultra) tiers come in. 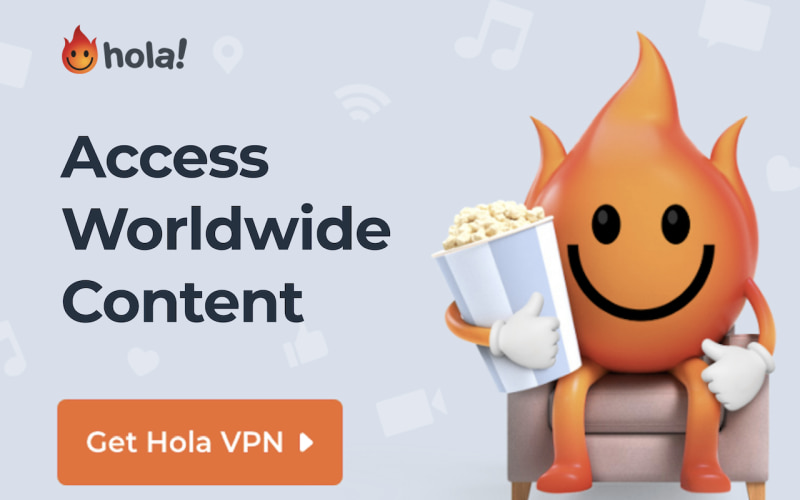 But Hola is different in another way: most VPNs only use their own servers, around the world. Hola uses a combination of their own high-speed servers, and their unique peer-to-peer technology.

Hola’s peer-to-peer network lets users all around the world share tiny parts of their resources with all the other users – creating a community-based VPN. This means that Hola routes your internet traffic through countless other peers in the networks, creating a fast and truly worldwide network.

And with 160 million users, it works really well.

But the real beauty – especially where it comes to streaming video (which needs speedy connections and a lot of bandwidth) – shows up on the Premium and Ultra tiers.

With Hola Premium, you get the best of both worlds: most of your traffic (including streaming video traffic) goes through Hola’s private high-speed servers (more than 1,500 around the world). In fact, you will never be a part of the peer-to-peer network, so your own resources will not be used at all.

However, since some websites and streaming services require either a “real” IP or an IP that is not listed as a data centre (which is how some places KNOW that you’re using a VPN, giving you the dreaded “You seem to be using an unblocker or proxy” error message), Hola can use their peer-to-peer network to bypass those blocks.

And while unblocking geo-blocks on streaming services is often a game of cat-and-mouse, in my testing Hola managed to bypass all the blocks almost every time, which is impressive.

And while Hola Premium may be enough for many of you – there’s also Hola Ultra, which costs a bit more, but gives you even faster speeds (so you get support for 4K video streaming), access to 200 additional Ultra Fast servers, and the ability to use the service on up to 20 devices (it’s 10 on the Premium plan).

How To Use Hola VPN To Unblock Netflix Around The World

It’s a good idea to test the waters with Hola’s free tier, but the paid tiers have a 30-days money-back guarantee, so you shouldn’t have any worries when you jump into that.

Once you subscribe to either the Premium or Ultra plans (you can also start with Premium and later upgrade to Ultra), the first step would be to install Hola on the device where you’re going to do your streaming.

They have apps and extensions for a long list of devices – from Windows PCs and Macs (both with stand-alone apps and extensions for browsers like Chrome and Firefox), to Android devices (via the Samsung Galaxy store or the Amazon App store), iPhones and iPads, gaming consoles, and – the Amazon Fire TV, which would be your easiest way to unblock and stream from other countries on the telly.

If you install Hola on your PC (as an app or a browser extension), using it is extremely simple: whenever you’re on a site (or a streaming service) where you want to “pretend” you’re coming from another country – you simply tap the Hola button, and choose a different country – that’s it!

So if you’re on Netflix, for example, Hola immediately lets you choose from a list of more than 40 countries. You might need to refresh your browser page – and voila, you get the content library for that country.

Of course, this isn’t just for Netflix – you can use Hola to unblock streaming services from the US and around the world, like Peacock, HBO Max, Paramount+ and many others. Remember that you still, of course, need to subscribe to those services – Hola simply lets you see what users in the US and other countries see – but you still need to pay for the service (though some, like Peacock and Tubi, have free-with-adverts plans).

Hola is also extremely easy to use on the Fire TV – once you install and run the Hola app, you see a list of the streaming-related apps you already have installed on your device – such as Netflix, Disney+, YouTube and others.

Once you choose Netflix, for example – you would then see a list of countries to choose from. Pick Canada – and the Netflix app runs with you “being” in Canada, and you get the appropriate library.

Again, if this all sounds a bit complicated – I assure you, it’s not. If you already know how to use an Amazon Fire TV, or are comfortable with installing extensions for your browser – this is going to feel like a breeze.

Want to give it a try? Check out the Hola deals that are running right now.