Best Portable DVD Players In The UK For 2022

For one, if you still have a large DVD collection, you still need a way to watch all those movies. And there are great bargains, with movies and TV series to be had for ONE pound sometimes – no streaming video service can beat that price. You don’t need any monthly subscriptions and contracts, or expensive one-time purchases – you get the DVD, and know exactly what you’re going to watch.

And unlike smartphones, portable DVD players have large screens – even up to 17.5” – which is great for watching in the car, or on holiday (with a built-in rechargeable battery) – and especially good for kids who might want to watch together. And while it’s true that an iPad (or similar tablet) can do the job just fine – tablets are, usually, much more expensive, and a lot more fragile. Try giving your kids in the backseat a £339 iPad… it’s a scary notion.

So yes, portable DVD players are not exactly “the way of the future”, but for now, they’re still an excellent tool for watching movies or shows on the go. (And as an added bonus, you can also connect them to your TV at home, so you get a DVD player without needing to buy an extra one for your living room.) 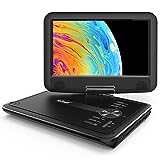 One of the best all-around portable DVD players, with all the important features

Portable DVD with a huge, high-quality screen (but costs more due to the size) 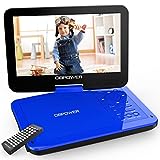 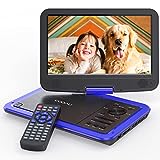 Most of the portable DVD players sold today are manufactured by Chinese companies – the big-name brands like Sony and Toshiba have all but stopped selling them. As with all Chinese technology products, it can be hit-or-miss.

But if you check the reviews carefully, and with Amazon’s excellent customer service, you’ll be fine in most cases – and even if there’s a fault, you have someone to talk to.

All the players we recommend in this article are considered to be of high quality, with good reactions from buyers – so basically, the choice comes down to the features you’re interested in, the screen size, and the price.

These are the main things to consider when deciding on a portable DVD player:

The players come in varying sizes, usually with swivel screens. You should pay attention to the total size of the player as well – even a smaller sized screen might have a bulky device around it, which will make it a daunting task to carry around.

Keep in mind that portable DVD screens usually don’t support an HD, 1080p resolution – so a bigger screen isn’t always better. You should also consider the weight, of course – no one wants to carry around a 3kg device. And the bigger the screen – the heavier the player is going to be.

Portable DVD players come in two distinct form factors – the regular, two-parts one (with a swivel screen on top and the player/controls on the bottom), and the one aimed at car headrests. The headrest one looks more like a tablet (albeit a lot thicker), and while you can definitely use it outside of a car (by holding it in your hands or putting it on a table), its main attraction is how easy it is to mount on the back of your car headrest, for easy backseat watching.

Most of the regular players, however, have a swivelling screen, and you can position the two parts in a way that also fits car headrests, usually with a separate case. It won’t be as pretty, and might not fit every type of headrest – but it works.

If you’re MAINLY going to use the DVD player in your car, our recommendation would be to buy a headrest-mounted one. But if you’re going to use it in a variety of locations, AND possibly in your car occasionally – you can get one of the regular ones, with a swivelling screen.

Portable players are meant to be, well, portable. If you keep running out of juice in the middle of a movie, and need to start looking for a power outlet, they aren’t very portable.

Don’t expect too much, of course – the manufacturers try to find a balance between the device being easy-to-carry, and the rechargeable battery holding up for a decent amount of time.

Five hours of use is typical of most good DVD players today, usually with a 2,500mAh rechargeable battery. The good ones also come with a car charger in the box, so you can save on battery (and charge it) while on the go.

If you buy a DVD from a store, you’re not going to have a lot of issues – you slide them into the device, and they’ll play.

But if you want to use DVDs you burned at home (home movies from a camcorder, clips you took with your phone, etc.), you need to make sure the portable player supports their video format.

The most common video formats (for DVD players) are MPEG-2/AVI/DIVX/XVID – and if your player supports these, you’ll be OK in most cases. (MPEG-4, unfortunately, is a bit sketchy on most portable players.)

Some players also support MP3 discs and regular music CDs, so you can use them to play music. And while the built-in speakers are usually pretty weak, you can connect the device to your headphones, or to an external speaker, and use it to play songs.

Oh, and if you want – you can even transfer your old VHS tapes to DVD with a special converter.

As for actually watching the video files on the device – some portable players also have USB ports which you connect to your computer for transferring files, and some have memory card readers.

Remember, DVD players have moving parts – it’s a disc spinning around inside, with a laser beam reading from it. If you subject the player to a lot of shaking and rattling, the playing might get interrupted. Some players address this with anti-shock mechanisms, either by securing the disc better, or by using caching to read-ahead, and keep playing even if there’s a short physical interruption.

Even though we’re talking about portable DVD players, they’re also – first and foremost – a portable screen, so you don’t have to limit yourself to a DVD. Some players let you connect external USB sticks, or insert an SD card via a card slot, and play movies/photos/songs from those sources.

That way, instead of burning DVDs, you can use USB sticks and SD cards to transfer movies and photos from your computer, and watch them on-the-go.

Some portable DVD players come with more features you might want to consider – while some of them seem a bit gimmicky, they can be useful, depending on your use-case. For example:

What About Blu-ray? As with DVD, many of the bigger companies stopped making portable blu-ray players, but some good ones are still available. Here’s my list of the best portable Blu-ray players. And if you want a set-top 4K Blu-ray player, I recommend the best ones here.

Tip: For extra portability and protection, consider getting a case/carrying bag for your portable DVD player. They’re not expensive and come in a variety of colours and use-cases. Click to Check the selection on Amazon.

An excellent all-around player at a decent price. 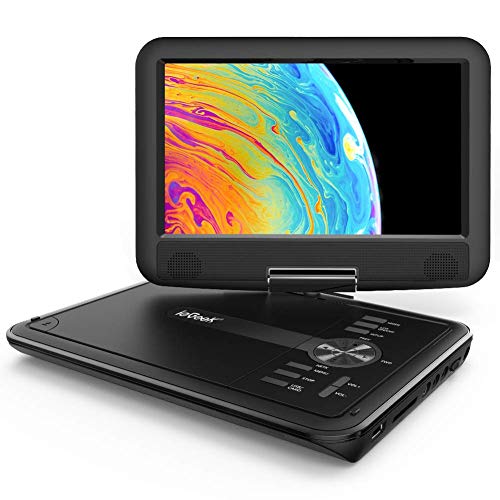 One of the best all-around portable DVD players you can find: It does everything you would expect, with all the important features, and a few extra ones – such as the ability to connect two devices and sync the same movie on both (so you can show two kids the same movie, for example.)

Do note that while the device is 11.5″, that includes the bezel – the screen itself is only 9.5″. Still, we like the fact that it’s light-weight and easy to carry, but that also means you should be careful not to toss it around too much.

If you’re looking for an excellent portable DVD player that does its job well, with plenty of excellent reviews from buyers – this one should be your first choice. 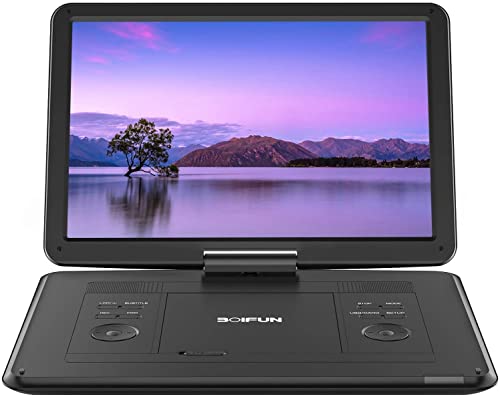 Most portable DVD players are sized around the 10″ mark for extra portability – but sometimes you want a bigger screen. What’s great about this player is that despite the enormous 15.5″ screen, it’s not too heavy (at around 2.5kg).

Naturally, the size comes with an added cost (Note that while the device itself is headlined as 17.5″, that’s with the frames – so the actual screen size is 15.5″).

Other than the large screen (and the excellent resolution), this portable DVD player comes with all the bells and whistles you could hope for – it remembers the last point you played on the DVD, it has shock resistance for those bumpy car rides, and it comes with a remote (but not a gaming joystick – though you can connect one).

The battery usage time is surprisingly good for such a large screen at 6 hours, and a car charger is included for those long rides.

If you’re willing to pay the extra price and are looking for a bigger screen, this is the one to get, as it offers excellent value for money.

Good sized screen that can swivel and fold like a tablet. 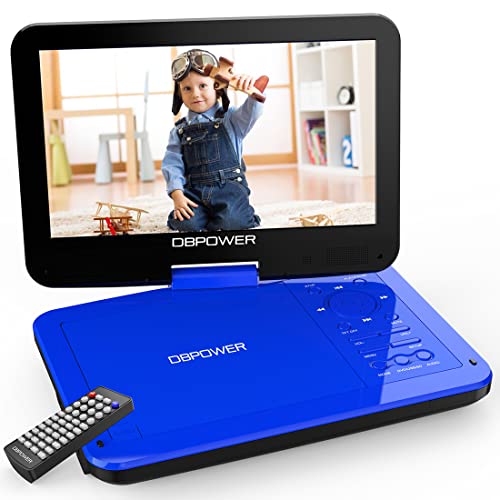 A decent mid-sized DVD player, it’s not as big as some of the others, but still gives you a bigger screen than some of the cheaper players. (Just remember that 12.5″ which they emphasize, is the size of the whole top part – the screen itself is 10.5″)

The screen can swivel up to 270°, and then be folded back, into a faux-tablet form (but it’s not a touch-screen, of course). This makes it easier to hold or hang on a car seat headrest.

Build quality seems to be OK, though, as with most Chinese players, some occasionally get a bad one.

All in all, this is a good player, with most of the features you would expect, and I’ve always been a fan of DBPower – but their players often go out of stock. If you can get one – it’s a great choice. 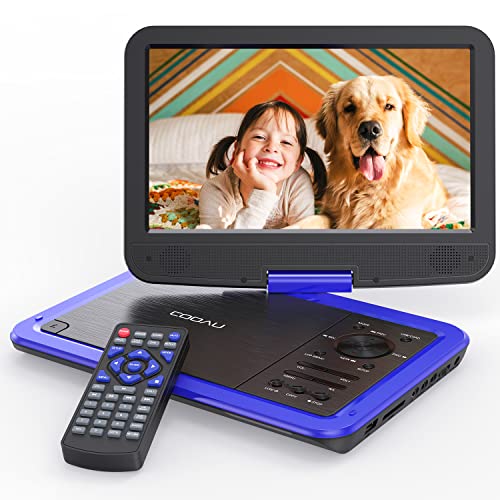 A slick-looking portable player (and you can choose from a few different colours), it has a decent screen and most of the important features. The screen can be turned around all the way, using it as a tablet, which also makes it easy to mount in your car.

Please note the issue with the screen size – while they present it as a 12.5″ player, the effective screen size is only around 10.5″ – the 11″ refers to the whole upper part, INCLUDING the speakers.

It has all the basic features you would want from a portable DVD player including an excellent screen, but the resolution is slightly lower than some other models (720×480, as opposed to 800×420), and the price is OK, but a bit higher than some (as of this writing).