A streaming service that’s dedicated to TV news channels has launched in the UK this week: NewsPlayer+. The service brings together 15 news networks from around the world, for a one-stop live streaming destination.

According to the company, the launch of NewsPlayer+ was brought forward in order to give UK viewers a chance to get a “global perspective” on the US Presidential Inauguration which takes place this week.

UK subscribers can immediately access a wide choice of broadcasters, including:

More news channels are expected to join later this month.

The service requires a subscription, but viewers can sign up for a 7-day free trial (without providing a payment card).

Once the trial is over, the monthly subscription currently costs £2.50/month, which is “a special launch offer”.

NewsPlayer+ works on mobile phones (with apps for both iOS and Android) and on a browser. While the website mentions Amazon Fire TV support, the Fire TV app isn’t available yet – we’re told it’s expected to go live on the Amazon App Store soon, with more devices to follow.

Headquartered in London, NewsPlayer+ has been developed by a seasoned team of OTT and Pay TV specialists whose backgrounds include the BBC, BritBox, CuriosityStream, Guardian News & Media and ITV, headed by CEO Richard Jacobs.

This is the first service to be launched by Player+, with more genres expected to follow later in the year, such as StagePlayer+, a streaming service dedicated to performing arts.

Another day, another streaming service – but with a very specific niche (news channels), NewsPlayer+ might be of interest to people who can’t get enough updates from around the world.

While some of these news channels are already available for free via Freeview or directly on the broadcaster’s website, others are harder to get. Plus, it’s convenient to have them all in one place.

When you first log in to NewsPlayer+, you get a unique “Wall of News”, with a selection of streaming videos from several of the supported channels (without the sound). 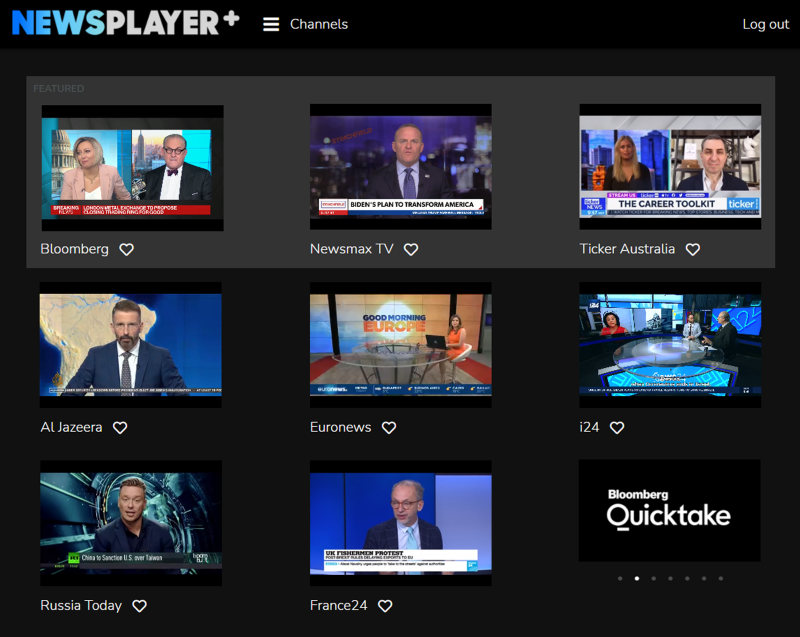 Tapping on one of those channels lets you focus on that particular channel, with the sound then turned on. It’s a fun way to see what’s on around the world, potentially finding a topic that interests you.

The streaming video works well, though the highest resolution for the moment is 720p and not Full HD (1080p).

The Android app works in a similar way, with the “Wall of News” and the ability to easily jump between the supported channels.

The app still has some kinks, unfortunately, and it froze on me occasionally, and also kept signing me out, so I had to re-login several times.

All in all, if you’re a news junkie, this could be an interesting service for you – but for a paid subscription, it’s disappointing you can’t get some of the more premium news services such as CNN – at least for now.