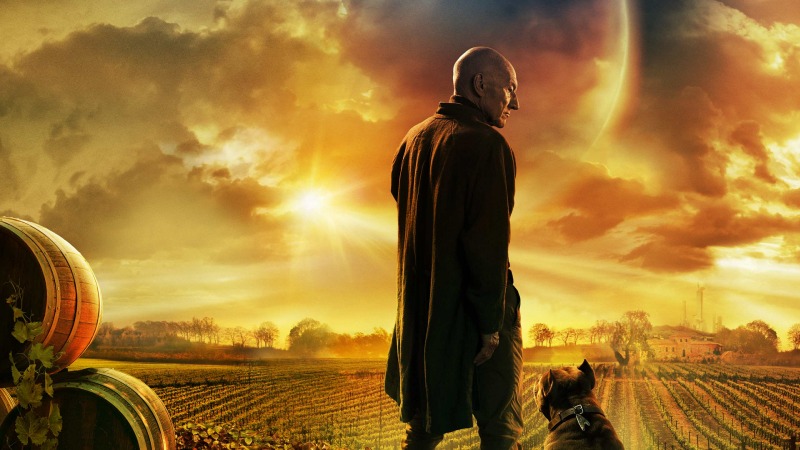 After a long wait (some might say a 26-years wait, ever since The Next Generation ended), Star Trek: Picard is finally here with Season 1, airing new episodes week by week. Fans in the UK who haven’t started watching yet, are probably eager to know how and where they can watch it online or streaming on their telly, legally.

So we’re here to help – and the best news? You don’t need an expensive cable subscription, and some of you can even watch Picard for free. Additionally, if this wets your Star Trek appetite, I’ll explain where you can watch some of the other Star Trek shows and films in the UK.

What Is Star Trek: Picard?

The series features the beloved character of Jean-Luc Picard (Patrick Stewart), and is set in the 24th century, 20+ years after the end of Star Trek: Nemesis (2002), which was the last film to feature The Next Generation’s characters.

As revealed on the show’s trailers, other characters from the Star Trek universe are also set to appear on Picard, such as Commander Data (Brent Spiner), Will Riker (Jonathan Frakes), Seven of Nine (Jeri Ryan) and others.

The series, created by Akiva Goldsman, Michael Chabon, Kirsten Beyer and Alex Kurtzman has so far met with critical acclaim, and Star Trek fans seem quite pleased with it as well. (You can read a review of Picard’s Episode 1 – and subsequent episodes – on the excellent Back To The Movies blog.)

To top it all, Star Trek: Picard has already been renewed for a second season.

How To Watch Star Trek: Picard In The UK

In the US, Picard airs on CBS All Access, which is CBS’s answer to Netflix – a streaming service which costs $5.99/month (with adverts), and airs TV shows like The Good Fight, Star Trek: Discovery and the new Picard show.

In the UK and the rest of the world, however, Picard airs on Amazon Prime Video – which is Amazon’s streaming video service.

The first episode of Picard premiered in the US on January 23, 2020, and subsequent episodes air weekly, on Thursdays in the US and Fridays in the UK.

So, unlike some other streaming shows, you can’t binge this show just yet – unless you wait for the entire 10-episode run to end.

How Do I Watch Star Trek: Picard For Free?

In the US, the first episode of Picard was available to watch for free on YouTube and Pluto TV. Unfortunately, those two options aren’t available in the UK. But there’s another way to watch Picard for free – for some of you.

If you want the full Amazon Prime membership (which also gives you free one-day delivery and other benefits which you can learn about here), you can either pay £7.99/month or £79 for a full year.

However, if you’ve never had Amazon Prime before, you can get a free, 30-days trial to either one of those plans.

That means you can effectively watch Star Trek: Picard for free, until your trial ends. Remember, though, that your plan will auto-renew once your trial ends, and you WILL get billed for it – so remember to cancel before that happens, if you’re not interested to continue your subscription.

Get A Free Trial To Amazon Prime

How To Watch More Star Trek In The UK

As the name suggests, Star Trek: Picard is an integral part of the Star Trek universe, and is a direct sequel of sorts to some of the shows that came before it.

You don’t have to watch ALL the Star Trek shows before Picard (or any at all), but if you want to get up to speed, The Next Generation is an excellent place to start.

Then you might also want to watch Star Trek: Voyager (because of Seven of Nine’s character), and the Star Trek films that featured the TNG crew – especially the last one, Nemesis, which has direct ties to the new Picard series.

How To Watch Star Trek: The Next Generation In The UK

While Star Trek, “The Original Series”, is the one that started it all – and is still regarded by many to be the best – many see The Next Generation as the one who made the franchise so popular.

The Next Generation, which was also created by Gene Roddenberry (just like the original series) premiered in 1987. It took some time – and a couple of seasons – before the show was able to really find its feet and become extremely popular.

The entire TNG cast was lovable, but Patrick Stewart, as Jean-Luc Picard, really shined, and brought to the show his quiet, Shakespearean gravitas.

The show lasted for seven seasons, with the last season airing in 1994. There are several episodes that relate directly to the new Picard series, including the series finale – the two-part episode, “All Good Things…”.

In the UK, all seven seasons of Star Trek: The Next Generation are available to stream on Netflix.

If you don’t have a Netflix subscription, you can also buy full seasons – or the entire series – to stream on Amazon, as well as on Google Play.

If you want something a bit more old-fashioned, you can also buy the entire series on DVD or Blu-ray.

And if you want all the classic Star Treks, don’t worry – Star Trek: Voyager is also available on Netflix in the UK, as well as Star Trek: Deep Space Nine, Star Trek: Enterprise and Star Trek: The Original Series.

Watch Star Trek: The Next Generation On Netflix

How To Watch Star Trek: Nemesis In The UK

Star Trek: Nemesis, which was released in 2002, was the tenth film in the franchise – and the last one to feature the cast of The Next Generation.

While Nemesis was rather disappointing, disliked by both critics and fans, it does have a few direct connections to the plot of Star Trek: Picard.

Without going into spoiler territory, you CAN pick up the plot of Picard without actually watching Nemesis, but some things will be easier to understand if you do watch it. (Plus, it’s not as bad as some think, especially if you watch it today, without too many expectations).

In the UK, Star Trek: Nemesis is available to stream on NOW TV, as part of their Sky Cinema pass (see my full NOW TV review here). Most of the other Star Trek films are there as well.

If you haven’t joined before, you can even get a 7-days free trial of Sky Cinema on NOW TV.

If you prefer, you can also purchase the film to stream via Amazon Prime Video, as well as most of the other UK streaming video stores.

How To Watch Star Trek: Discovery In The UK

Last but not least, let’s not forget Picard is not the only new Star Trek show. Star Trek: Discovery launched back in 2017, and its success was one of the things that lead to the creation of Picard.

Star Trek: Discovery starts as a prequel show, beginning a decade or so before The Original Series. Two seasons have aired so far, and Season 3 is expected to premiere later in 2020.

According to the show’s producers, there are no planned crossovers between Discovery and Picard – at least for now. But that doesn’t mean we won’t see some easter eggs here and there…

In the US, Star Trek: Discovery is on CBS All Access, just like Star Trek: Picard. But in the UK, the two sister-shows have been separated, as Discovery was bought by Netflix.

Both seasons are currently available to stream on Netflix, and Season 3 episodes will be added week-by-week once the show returns.