Best WiFi Smart Plugs In The UK For 2022

Our homes are getting smarter and wiser these days, with voice-controlled devices, smart thermostats and app-controlled security cameras. Yet, many devices that we use are still “dumb”, and stand in the way of making our home truly smart. The solution? A WiFi smart plug.

A WiFI Smart Plug lets you turn regular power sockets – and anything connected to them – into smart devices that can be controlled either with an app or with voice assistants like Amazon Alexa or the Google Home Assistant.

However, while app-controlled smart plugs are pretty easy to use, there are a few things you need to consider before you choose the right one for you. So in this review, I’ll take a look at the best internet controlled power sockets for 2022 (that are available in the UK) and explain some of the things to look out for before you buy. 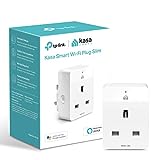 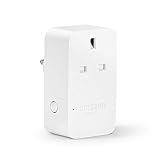 Easy to use and reliable WiFi smart plug, but only works with Alexa 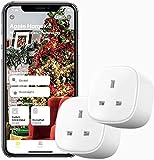 A reliable WiFi smart plug and a good bundle price for a 2-pack. 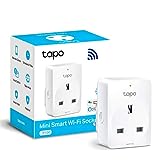 What Is A WiFi Smart Plug?

Despite the name, a “Smart Plug” is a pretty simple concept – it’s a power socket that plugs into the power socket in your wall. Then, you plug your other device – the one you want to control – into the smart plug, and you’re one step closer to having a smart home.

The “smart” bit comes from the fact that the plug then connects to your WiFi network at home (some work with Bluetooth), and can be controlled via an app on your phone or a voice-activated device like the Amazon Echo.

Remember how most UK power sockets have a toggle switch? A UK smart plug is basically a glorified toggle switch, that can be controlled remotely. That’s it, for the most part. (Some plugs add a nifty capability of being able to monitor your energy consumption – more on that later).

So what’s the big deal about that, and why are WiFi smart plugs becoming so popular? Because we’re getting used to being able to control everything from our phones and Alexa devices – and we want to add older devices to this “smart” revolution.

Installing and using these plugs is usually quite simple – you plug it into the wall, then download and install an app on your phone (the best smart plugs have both Android and iOS apps). You use the app to connect the plug to your WiFi network, and that’s it – now you can switch the plug (and the device connected to it) on and off with a tap on your phone or voice control.

Additionally, you can usually set timers and schedules – so you can turn the device on every day at 11:00. You can also connect multiple plugs and devices together for a single “plan”. You would still need a plug for each device – but they’re so cheap these days, it’s easy to connect multiple devices and start building a smart home.

If you add a voice-controlled device such as the Amazon Echo or the Google Home, you can then control your smart plug with the voice assistant. So you would say “Alexa, turn on the kettle” – and voila, you have hot water on the way.

What Can I Do With A WiFi Smart Plug?

The perfect example of a use case for app controlled plugs are lamps and lights. Yes, these days you can buy smart light bulbs that connect to your WiFi by themselves, but if you’re using older lamps, and don’t want to replace your light bulbs – then a smart plug can be used to control any type of lamp (as long as it connects to the power socket.)

Other than lamps, there are a few additional interesting uses these smart sockets:

The possibilities are endless. And sure – controlling your light and your TV with your voice, instead of getting up to push a button, IS a bit lazy. But it’s fun, it’s convenient, and it truly makes technology work for us…

Which Is The Best Smart Plug? Things To Consider

First, there are two things you need to remember, that aren’t related to the plugs at all:

Now that the basics are set, here are a few other things you need to watch out for when looking for the best smart plug in the UK:

Easy To Use Apps

The whole point of a smart plug is being able to connect it using your phone (and a voice assistant – see ahead). However, if the plug comes with a cumbersome, difficult-to-use app, then it’s not worth the money – or the hassle. Instead of saving time – you’ll be struggling to understand the app.

In addition to the app being easy to use, make sure it works with your smartphone. The best WiFi plugs will have both iOS and Android support. Some plugs also support Windows 10 PCs – but that’s less common.

However, there are three major voice assistants in the market today: Amazon Echo (Alexa), Google Home and the Apple Homekit. and you need to make sure the smart plug you want to buy works with the voice assistant you have.

All the devices in this article are compatible with Amazon’s Alexa voice assistant (which is part of their Echo line of devices, as well as some 3rd party devices.) Most of them also work with Google’s Voice Assistant.

If you want to be 100% sure that your plug works with Amazon Alexa, look for the “Works with Alexa – Amazon Certified” logo:

“‘Works with Alexa’ is a certification program that raises the bar on responsiveness, reliability, and functionality, ensuring customers have the best smart home experiences.”

Smart plugs that work with Apple’s HomeKit, however, are not very common in the UK at this point – which is why I’ve excluded them from this article, for now. (If you still want one – take a look at the Eve…)

Smart Plugs That Need A Hub

Most smart plugs are WiFi-controlled and connect directly to the network, where they can be controlled with your phone or voice assistant.

Some plugs, however, need an additional central “hub” that connects them all together. Then, your phone/voice assistant talks to the hub, instead of directly to each plug.

While this can sometimes offer more advanced functionality (especially if you want to connect multiple devices around the house), it also complicates things and makes them more expensive. Therefore, all the smart plugs reviewed here work by themselves, without needing an additional hub.

Some smart plugs can monitor your device’s energy usage. So if you leave the radio on for two hours, you can see how much it’s going to cost you in electricity bills. It’s a useful feature if you’re looking to conserve energy and save money by giving you more data about your devices – but consider whether it’s worth the extra cost for a plug with that feature.

If This Then That (IFTTT for short) is a service that lets your devices and apps and software “talk to each other”. You can set simple (or complicated) rules that help your devices work together. For example – if your security cam senses movement (which an app detects), IFTTT can automatically tell your smart plug to turn on the radio, for a fuller smart home experience.

The possibilities are truly endless – but you need a smart plug that supports connectivity with IFTTT, so look out for that.

Picking an Editor’s Choice is not always easy, but this time it was a breeze – a combination of a well-known manufacturer (TP-Link), an affordable price, and all the important features you would want from a smart WiFi plug.

Setup is fairly easy – you install the app (either iOS or Android), connect the device to your WiFi network, and that’s about it. The TP-Link app is  easy to use (though can misbehave occasionally, especially if your WiFi reception is problematic), and you can use it to control all your TP-Link devices (including other plugs, smart light bulbs, etc’) – which is convenient.

Pairing with an Amazon Alexa or a Google Assistant device is also fairly easy (though there’s no Apple Homekit support), and the If This Then That support means you can create some nifty tricks. (For example – when your Uber drops you off, the heating can turn on automatically…).

Unlike the original version of this plug, this newer “Slim” version is quite small, and won’t block adjacent plugs on the same power socket.

All in all, this is an excellent, reliable smart plug that is highly praised by most buyers.

If you want a WiFi smart plug that comes directly from a well-known and reliable company – an Amazon plug is certainly a safe route to take.

The downside is that this plug only supports Amazon’s Alexa voice assistant – so you can only control it via Echo/Alexa devices (or the Alexa app on your phone).

If that’s not an issue for you, you’ll be getting a very easy to setup – and use – smart plug, that works well with Alexa, where you can also set routines that this plug is a part of (so do several things in the house with just one command, or at a certain time).

We just wish it was a bit cheaper – but if you snag it with a special offer, this one’s a no brainer.

With WiFi smart plugs gaining popularity, the market got filled with an endless list of Chinese smart plug, with company names you’ve never heard of.

That, however, doesn’t mean they’re bad – it just means you need to be careful with your picks – and the Meross smart plug seems to fit the bill with both features and reliability.

The Meross WiFi smart plug has most of what you would look for – easy installation (though the app is not as friendly as some of the others), it supports both Alexa and Google Assistant, and it’s small enough so it won’t block adjacent sockets.

This is another great smart plug, if you’re willing to go with an unknown company.

TP-LINK’s products are usually excellent, and the Tapo WiFi smart plug is not different. However, this is a slightly cheaper version of the KASA line (our Editor’s Choice), which also comes with a few missing features.

You do get most of the important features, though – Alexa and Google Assistant support, an app to control the plug, scheduling and a countdown, and both iOS and Android support.

It doesn’t support If This Then That, unfortunately, and it doesn’t work with TP-LINK’s existing KASA apps – so if you have KASA plugs, you’ll need a separate app. On the plus side, the compact size means it’s less likely to clog your entire outlet.

All in all, if you’re willing to settle on a couple of missing features, this presents great value for money.